I first met monarch butterflies in 1970 while working as a farm hand on my brother-in-law’s truck farm on Nantucket Island.  I was trying to understand how milkweed flowers changed to produce milkweed pods and I brought home the caterpillars by mistake.  Very soon all of my attention was focused on the yellow, black and white caterpillars munching on the milkweed. I was fascinated by their metamorphosis into a jade-green chrysalis and emergence as beautiful orange and black butterflies.  They became my teachers, a metaphor for my life and eventually a central focus for much of my work.

We tend to think that a monarch goes through major metamorphosis when it becomes a chrysalis or when the butterfly emerges from the chrysalis, but in fact the parts that will transform the caterpillar into a butterfly are present from the time that the egg hatches.  Inside the caterpillar are “imaginal disks.”  As wonderfully fanciful as the word imaginal sounds, it is actually referring to the adult stage of the monarch which is called the imago.  These disks are the cells that will become the butterfly’s wings, legs, proboscis and antennae, among other things.  By the time the caterpillar is half an inch long its butterfly wings are already developing inside it.   By the time it is a full grown caterpillar all of the imaginal disks have grown considerably. 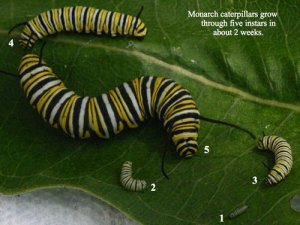 When the caterpillar is a full grown fifth instar caterpillar it is ready to molt the fifth time  to become a pupa, or chrysalis. The caterpillar will begin to wander until it finds an appropriate place to create its chrysalis.  It will lay down a silk mat, like it has every time that it has molted before.  But this time it will spend time creating a small wad of silk–a silk button—in the middle of its mat.  When it is ready it will grasp the silk button with it last prolegs and hang upside down.  This is called hanging in “j.”

As it begins to rearrange its body parts inside its exoskeleton, the monarch will withdraw its body from the filaments and the empty exoskeleton will hang limp. If you shine a light through the caterpillar's body near the last prolegs at the stage in the last picture, you will be able to see its cremaster, the stick like appendage from which it will hang as a chrysalis, through the translucent exoskeleton. © Ba Rea 2011

After about 18 hours of hanging in “j”  ( the time may be longer if it is cool or shorter if it is hot), the exoskeleton begins to split between the front filaments.

As the monarch wriggles and pushes its exoskeleton toward the last prolegs where it is holding on to the silk button, it must execute a very tricky feat. With the wad of discarded exoskeleton and the last two prolegs that are holding the monarch up, only tenuously attached to the emerging chrysalis and lodged on a couple small protrusions on the chrysalis called holdfast tubercles, the monarch must pull a small stick like appendage, called a cremaster, out of that wad of old skin and drive it into the silk button.  Its exoskeleton is very soft and pliable at this point.  The monarch cannot afford to fall.  Its exoskeleton is not sturdy enough to withstand an impact with a hard surface. The chrysalis with all the beautiful new butterfly parts it has been growing would splatter.  Accidents like that have made some people believe that at this point the monarch is nothing but a loose soup contained inside the chrysalis exoskeleton, but in fact it has a beating heart, a respiratory system, emerging wings, antennae, legs and proboscis–all kinds of organization and function. It just needs a little down time to complete and switch over to the new system. Old, no longer needed caterpillar parts must be reabsorbed and the butterfly parts formed by the imaginal disks must be completed.  It MUST attach itself directly to that silk button. 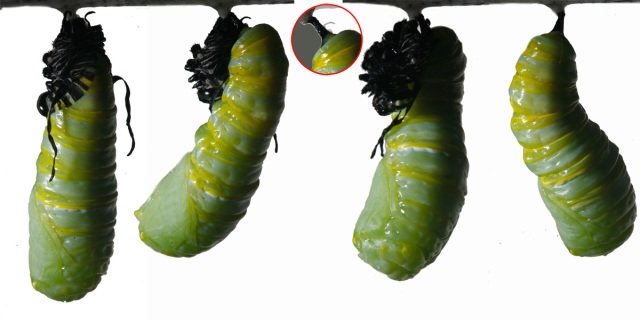 It will take a few hours for the chrysalis to pull itself into a neat, compact form and for its exoskeleton to harden.

By carefully examining the chrysalis you can find many of the butterfly's features. You can also tell if it is a boy or a girl! © Ba Rea 2011

You can see the proboscis, antennae, wings and legs on the surface of the chrysalis, and locate the spiracles through which it can breathe.  ( An excellent picture of a newly formed monarch chrysalis, which very clearly shows the antennae, legs, wings, proboscis and other body parts of the developing monarch, can be found on Edith Smith’s (of Shady Oak Farm) Wednesday, January 21, 2009, Blog page “What is Going On Inside a Monarch Chrysalis?” Please check out the link on the sidebar. )  If you examine the segment just below the six dots under the cremaster you can tell whether the monarch is a boy or a girl. Girls have a little crease or indentation in the segment.

The monarch will be a chrysalis for about 10 days (longer if it is cooler, shorter if it is hotter).

Comparing a fairly new chrysalis and one about to eclose, it is easy to pick out the wings. If you look closely near the top under the cremaster you will also note that one of those pairs of dots under the cremaster sticks out. That is the holdfast tubercle that was so important when the monarch was securing itself to the silk button. A groove or step in the abdomen of the dark chrysalis that is ready to eclose shows you that that monarch has begun to break down its exoskeleton with enzymes in preparation to break it open. © Ba Rea 2011

Examine the front of the chrysalis to see the proboscis (it is in two pieces side by side in the middle); the antennae (on the outside of all the little divisions and it has visible little sections) and bits of the legs of the butterfly. You can see these on a younger green chrysalis as well. I'll post a photo as soon as I locate one! © Ba Rea 2011

An excellent picture of a newly formed monarch chrysalis, which very clearly shows the antennae, legs, wings, proboscis and other body parts of the developing monarch, can be found on Edith Smith’s (of Shady Oak Farm) Wednesday, January 21, 2009, Blog page “What is Going On Inside a Monarch Chrysalis?” Please check out the link on the sidebar.

The triangular piece of chrysalis exoskeleton covering the antennae, legs and proboscis breaks open first. The monarch swings down and out of the chrysalis with a huge abdomen full on hemolymph ( the insect equivalent of blood), tiny wings and a proboscis in two pieces. As contractions move up and down the abdomen, forcing hemolymph into the veins of the wings and expanding them, the monarch knits together the two sides of its new mouth. Once assembled, the proboscis will be perfect for drinking nectar.  When the wings are fully expanded the butterfly will excrete a few drops of reddish liquid.  This is meconium, it is the waste produced by the monarch while it was a chrysalis. It probably held onto it until after the wings were inflated to give itself an extra little bit of pressure to help force the hemolymph into the wings…or maybe it was just too busy to deal with it until it was done with all that other work!

All summer long monarchs will eclose from their chrysalides, mate and lay eggs.  A female may lay anywhere from 400 to 1200 eggs over her 4 week life time. But at the end of the summer,  a generation of monarchs comes out of chrysalis ready to live 8 months and take on a great migration to the monarch reserves in Mexico or, if they live in California and in  the west, to roosts along the coast. These butterflies will emerge in reproductive diapause (they will be sexually immature) and they will be ready to follow cues to a place where the temperatures and moisture are just right to allow them to wait out the winter months before they return to their summer breeding grounds in the spring.

(Most of the photos above were taken by my brother Mark Rea as we watched several monarchs going into “j,” become chrysalides and eclose as butterflies.  I will be coming back to this page to add more…

50 Responses to About Monarchs