Looking into the valley from the Knobs

This year the monarchs came early to the Knobs of West Virginia.  Usually I see a few eggs in May.  The butterflies are likely the offspring of the Mexican migrants hatched from eggs laid in the southern tier of states. The migration north is still a strong pull for the monarchs at that point and I almost never see the butterfly that leaves the eggs. She and all the other monarchs are just passing through as they head north in a drive that repopulates the summer breeding grounds each year all the way up into Canada by around the end of June. But the inflow of monarchs usually continues and by mid-June eggs start showing up in my usual tromping grounds with more regularity.  By the last week of June, I am chasing eggs in earnest in order to be ready for my summer classes and programs. (Well that’s what I tell folks. Truth is I’m addicted–let’s call it devoted.  I’d be out there hunting for them if I were the only person around and nobody else cared!)

This year on April 30th I spotted a faded, tattered female monarch laying eggs on the tiny starts of milkweed poking through the ground at the switchback on Raines Road. Her fluttering stop and move, stop and move behavior was obvious egg-laying behavior and when I checked the plants I discovered that she had laid 30 or more eggs on a small cluster of 4 inch high milkweed ramets.  I collected those eggs and others that I found over the next week or so until I had around 75. I told myself several years ago that I wouldn’t start this egg collecting until the end of June, but this was an emergency.  So many eggs loaded on the tiny starts of milkweed ramets would produce more caterpillars than those plants could feed.  I was rescuing monarchs.

Monarchs arrived early a lot of places this year.  It was hotter and drier than usual in the south this year and strong winds and storms helped to carry the migrants out of Mexico much farther north than normal.  Scientists are concerned that these conditions will produce a poor or at best average summer populations.  I was concerned that the early push north might reduce the numbers of monarchs filtering into my area in June when the population that provides the caterpillars and butterflies for my summer programs is usually building.

Monarchs mating in my tent

I raised over fifty monarchs (and gave away around 25)—offspring of those first eggs—that eclosed between June 9th and 12th,  just in time to help me celebrate my 60th birthday.  That week it was hot in West Virginia, getting into the 90s nearly everyday.  I kept them in a screen tent long enough to become sexually mature and start laying eggs, then released them to join the rest of the clan in the continuing northerly migration.  I wanted them to leave a few eggs on the Knobs on their way out.  They left around 100 eggs in my tent and at this point I have about 75 caterpillars.

Monarch egg on the underside of a milkweed leaf

I’ve been checking the milkweed daily for eggs, and except for a few eggs a couple of weeks ago, probably left by the monarchs I raised, I hadn’t found anything until today.  Today I found 3 eggs about 3 miles apart.  So hopefully we’re on for the season.  A little later than usual, but it’s an unusual year, and I have those 75 caterpillars and the screen tent to boost numbers for my monarch programs.  The milkweed is blooming and lush. We’re ready. 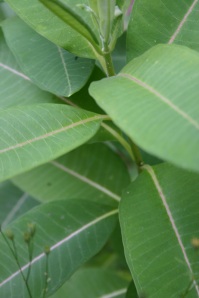 I haven’t spotted the monarchs leaving the eggs since the one I saw in April. I always wonder what her trajectory is.  This area is wooded with common milkweed (Asclepias syriaca) growing in the sunny edges of roads and large agricultural or overgrown fields. My search sticks to roads and paths but the monarchs have no such restrictions.  They can fly up out of the valley and come down in open areas bouncing from field to field or follow the open areas along the roads. 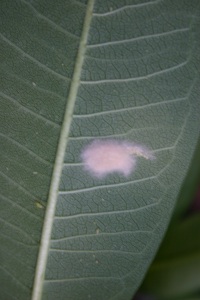 These voracious, competing consumers (a species that eats milkweed like the monarchs) stick together as young caterpillars and can completely strip a milkweed plant.

This predator is eating a milkweed leaf beetle larva

There are lots of predators out there in the milkweed as well.  It will be an interesting season. 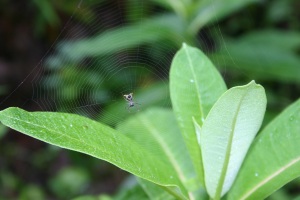 A spider setting up shop in the milkweed.